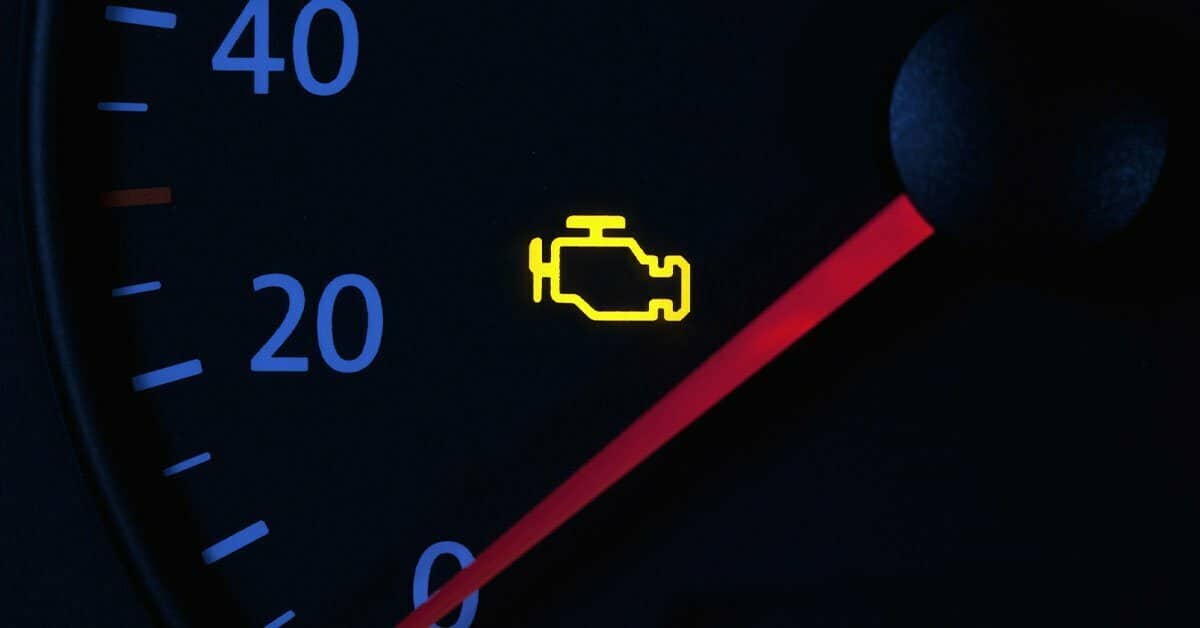 6 Reasons Why Your Check Engine Light Is On

Cars are great communicators, even if the message isn’t always something we want to hear. Cue the check engine light, a driver’s biggest fear. What does it mean? What should I do? Do I need to pull over right away? Should I forward my next pay cheque straight to the mechanic?

Firstly, don’t panic. An illuminated check engine light could indicate a significant issue with your car’s powertrain, but it could also indicate something quite minor, like a loose petrol cap. Secondly, don’t ignore it. If there is trouble brewing under the bonnet, the check engine light may have picked up on it early, before too much damage is done.

In other words, when your car is talking to you, listen. Here’s what it might be trying to say.

What does the check engine light mean?

You’ve probably noticed that your dashboard is full of warning lights: low fuel, ABS and air-bag warning, temperature warning, oil pressure, battery charge. Like all of these, the check engine light is part of your car’s on-board diagnostic system, designed to let you know of impending issues.

While the ABS warning light, for example, is designed to light up in the case of issues with your ABS braking system, the check engine light illuminates when the diagnostic system has picked up an issue with your car’s powertrain. The powertrain encompasses everything from the engine to the transmission and all related components. As you can guess, there are numerous reasons why the check engine light turns on.

Let’s take a look at the most common reasons.

Why your check engine light is on

Very briefly, ignition coils generate the electricity used by spark plugs to ignite the fuel and air mixture within the cylinders. Modern cars often have one coil per cylinder, and together they’re called a coil pack. An issue with one or more of these coils can certainly trigger the check engine light to come on. Coils produce many thousands of volts, so if one misfires, sensitive modules can easily be damaged. Just like a lightning bolt can damage your TV, a faulty coil can also damage your engine computer.  Faulty spark plugs could also be the culprit, as they can cause an engine to misfire or hesitate under acceleration.

Keep in mind, though, that diesels have neither coils nor spark plugs.

The modern engine and transmission are quite complex. While it contains a lot of robust and heavy components, it also relies on delicate sensors, modules and wiring. These parts need to be communicating with each other constantly for the systems to operate correctly. Once they don’t, the check engine light will be triggered.

An engine needs the right amount of air mixed with its fuel to run properly. If the air/fuel mixture is off, your car will either stall or simply refuse to start. To keep an eye on the levels, we use something called an air mass sensor. When it fails, the diagnostic system will get a message indicating there’s an issue with the air-fuel ratio, and the check engine light will be activated.

Another crucial sensor necessary to a smooth-running engine. The oxygen sensor detects the level of unburned oxygen in your car’s exhaust. Too little or too much indicates a mixture imbalance and could result in damage to the engine. One of the most common reasons why the check engine light comes on is a faulty oxygen sensor. Oxygen sensors can also highlight other issues like intake system air-leaks, so they can be a useful diagnostic tool too.

You’ve just filled up at the bowser and re-joined Melbourne’s all-day peak hour traffic. Suddenly, the check engine light switches on, and a cold sweat immediately breaks out. If this is you, don’t panic – rejoice! In all likelihood, it’s a straightforward case of a loose petrol cap. If petrol vapour can escape around the cap into the atmosphere, the check engine light can come on. Pull over, give the petrol cap an extra twist and the light should hopefully disappear.  If it remains on then maybe you’ve just picked up some bad fuel – which is more common than you think – and unfortunately this would require some professional intervention.

The catalytic converter is a crucial bit of equipment and is part of your car’s exhaust emissions system, converting carbon monoxide generated by the combustion process into carbon dioxide. If you notice a rotten-egg smell emanating from your car, it’s likely the catalytic converter isn’t working properly. Get it checked immediately, as your car cannot run without it.

The diesel particulate filter, or DPF as mechanics call them, trap pollution particles and re-burns them so they don’t enter the atmosphere. Unfortunately, these filters can become blocked, especially if the car is driven on too many short trips around the suburbs.

To make sure your DPF is in good shape, have your oil changed regularly and make sure you get your mechanic to check the pressures with their handy scan tools, and take your car for some highway runs every now and again to prevent it getting clogged, particularly if you mostly do short trips around town.

Is it safe to drive while the check engine light is on?

Most of the time, the check engine light is the first warning you have of an issue with your car; you haven’t noticed any odd smells or any surging or stalling. In this case, it’s generally safe to keep driving to a convenient location and get in touch with your mechanic so the problem can be diagnosed.

If, however, you’ve noticed odd things, such as a bad smell or a jerky ride, it’s best to stop driving as soon as it’s safe to do so and get your car seen to by a professional. Some warning lights also have multiple modes – changing colours or flashing to indicate how bad the problem is.

Noe, if the check engine light is orange or red, we all know what that means. Yes, it means something serious is going on that should be attended to straight away, even if that means calling the road-side assistance organisation. If you keep driving while the red light is on, more damage may occur.  The orange light is more common and means something less serious is going on, but it still needs to be checked as soon as possible.

If the engine light is on, get it checked

As you can see, the check engine light can indicate any number of issues. The best thing you can do is get in touch with your mechanic as soon as you can. It might be an intake air leak, but if it’s something more sinister, time will only make it worse (and more expensive). Your car doesn’t mince words – if it’s trying to talk to you, pay attention.